The United States has long treated poverty and disability as separate legal categories, a division grounded in widespread assumptions about the “deserving” and “undeserving” poor. In the case of disability, individuals are generally not thought to be morally responsible for their disadvantage, whereas in the case of poverty, disadvantage is assumed to be the fault of the individual, who is therefore less deserving of aid. This Article argues, however, that recent advances in brain and behavioral science undermine the factual basis for those assumptions. Poverty inhibits brain development during childhood and, later in life, adversely affects cognitive capacities that are key to decision-making and long-term planning. The science of scarcity is complex and ongoing, but its most basic finding is quickly approaching consensus: poverty’s effects in the brain can be disabling.

This Article argues that understanding poverty as disabling has potentially significant implications for policy and doctrine. Viewing poverty as disabling would provide support for poverty programs with less sludge and more money: proposals such as universal basic income, negative income tax, child grants, and greatly simplified benefits determinations. It also reanimates insertion of social welfare concerns into the dominant civil rights framework for disability policy, and could resolve longstanding tensions between disjointed federal disability laws. In addition, brain and behavioral science may support litigation strategies to compel accessibility to existing systems and potentially help promote a new public understanding of the causes of poverty.

The Article concludes by considering the potential (and significant) downsides of using the lens of science in service of policy: backlash, misunderstanding, and the fragility of relying on nascent science to support fundamentally normative policy goals. One necessary mitigation strategy involves the careful translation of science, including its limitations and residual uncertainties, into legal scholarship, an approach this Article attempts to both model and articulate.

New Article: “Their Home is Not Their Castle: Subsidized Housing’s Intrusion into Family Privacy and Decisional Autonomy”

The anti-Black racism that has permeated public benefits programs and federal housing policy for over a century persists in subsidized rental housing. Public housing authorities (PHAs) impede the ability of tenants—who are disproportionately Black women—to change household composition as their family situations change. PHAs routinely take months or longer to approve requests to add or remove household members and often require tenants to produce inaccessible third-party verification of a former household member’s new address before removing them from official records. In failing to grant these requests promptly, PHAs infringe on tenants’ fundamental right to privacy and family autonomy, impose a financial burden on tenants who have limited resources, and put tenants at risk of eviction if former household members are arrested for criminal activity.

This Article proposes workable solutions to these problems. First, PHA failure to timely respond to a request to adjust household composition should be treated as a constructive denial, as is done in fair housing law and other areas of administrative law. This strategy would allow tenants to pursue administrative and judicial review rights that already exist in public housing and the housing choice voucher program. Second, the statutory or regulatory schemes governing subsidized housing should be amended to include subpoena powers such as exist in the Administrative Procedure Act to allow tenants to access needed third-party records. These changes would protect the substantive and due process rights of vulnerable tenants and help dismantle systemic racism that continues to plague public benefits programs.

Debates over inequality have largely ignored the largest body of people living in poverty. Although anti-poverty policymaking focuses overwhelmingly on the chronic poor, a far larger number of people suffer occasional acute bouts of poverty. The causes of the acute poor’s problems, and their needs, differ significantly from those of the chronic poor. Even short spells of poverty can cause serious, physical, psychological, and material harm as well as impairment in their ability to return to their former circumstances.

Demographically, the acute poor resemble the general population far more than the chronic poor, yet they receive little sympathy: politicians may praise them in the abstract, but all too often the acute poor become collateral damage in struggles over the treatment of the chronic poor. The standard model of public welfare law, which is built around avoiding moral hazard, ill-fits the acute poor. A combination of eligibility limits, arduous procedures, deliberate stigmatization, waiting lists, and conduct requirements reduces the chronic poor’s receipt of aid but often affects the acute poor even more powerfully. More recently, some politicians have begun to attack the acute poor directly. The acute poor pay for the safety net in good times but cannot access it in bad.

Replacing the standard model of public welfare law would allow limited public funds to better serve all low-income people, acute and chronic alike. Greater attention to the acute poor would reduce their hardship and could lead to reexamination of some overly simplistic ideas about the chronic poor as well.

Leveraging hunger to compel low-wage work has been a tool of oppression since slavery. Exercising control over parenting and infant feeding also echoes back to the brutal practices of that period. Modern work requirements attached to the receipt of welfare (TANF) and food stamps (SNAP) arose out of unfounded fears of fraud based on racial stereotypes like the Welfare Queen. While food assistance helps raise households out of poverty, work requirements do not. Instead, they lead to greater food insecurity by removing people from the program through sanctions and deterring others from registering. The nature of the work performed to satisfy work requirements — unskilled and low wage — rarely leads to long-term,
gainful employment. When new mothers leave the home to satisfy welfare work requirements, they have no choice but to formula feed their babies. You Better Work argues that the harmful effects of TANF and SNAP work requirements are unconstitutional under Equal Protection, Substantive Due Process, the Thirteenth Amendment, and the Unconstitutional Conditions Doctrine.

New Article: The Architecture of a Basic Income

The notion of a universal basic income (“UBI”) has captivated academics, entrepreneurs, policymakers, and ordinary citizens in recent months. Pilot studies of a UBI are underway or in the works on three continents. And prominent voices from across the ideological spectrum have expressed support for a UBI or one of its variants, including libertarian Charles Murray, Facebook co-founder Chris Hughes, labor leader Andy Stern, and—most recently—former President Barack Obama. Although even the most optimistic advocates for a UBI will acknowledge that nationwide implementation lies years away, the design of a basic income will require sustained scholarly attention. This article seeks to advance the conversation among academics and policymakers about UBI implementation.

Our prior work has focused on the philosophical foundations of a basic income; here, we build up from those foundations to identify the practical building blocks of a large-scale cash transfer program. After canvassing the considerations relevant to the design of a UBI, we arrive at a set of specific recommendations for policymakers. We propose a UBI of $6000 per person per year, paid to all citizens and lawful permanent residents via direct deposit in biweekly installments. We argue—contrary to other UBI proponents—that children and seniors should be included, that adjustments for household size and cost of living should be rejected, that recipients should have a limited ability to use future payments as collateral for short- and medium-term loans, and that the Social Security Administration should carry out the program. We also explain how a UBI could be financed through the consolidation of existing cash and near-cash transfer programs as well as the imposition of a relatively modest surtax on all earners.

Importantly, the building blocks of a UBI do not necessarily determine its outward face. By this, we mean that economically identical programs can be described in very different ways—e.g., as a UBI with no phaseout, a UBI that phases out with income, and a “negative income tax”—without altering any of the essential features. To be sure, packaging matters to the public perception of a UBI, and we consider reasons why some characterizations of the program may prove more popular than others. Our article seeks to sort the building blocks of a UBI out from the cosmetic components, thereby clarifying which elements of a UBI shape implementation and which ones affect only the outward appearance.

New Article: Combining Income and Wealth into a Single Instrument: A Review of Taxing Inequality

Ari Glogower’s Taxing Inequality is an ambitious, thought-provoking piece. He makes three major arguments: (1) that the economic power theory justifies taxing wealth in addition to income, (2) that separate taxes on wealth and income are inferior to a combined tax that incorporates both into a single instrument, and (3) that the best way to accomplish this goal is to include in income an amount equal to an annuity-equivalent portion of the taxpayer’s wealth. Although it departs from the structure of the article, I will address (2) before considering (1) and (3) together.

Joe Pinsker, Why Rich Parents Are So Set on Their Kids Going to Top Colleges, The Atlantic, Mar. 13, 2019. “There are plenty of examples of young people who go to all kinds of different schools who lead very successful and fulfilling lives, regardless of the name on their diploma,” . . . that may be true, but it’s harder to convey on a bumper sticker.

Despite our rhetoric of inclusiveness, a significant number of youth from poor families do not share equal access to America’s elite colleges and universities. While America has achieved the highest level of educational attainment of any country, it runs the risk of losing this position unless it can markedly improve the precollegiate preparation of students from racial minorities and lower-income families. After identifying the “equity” problem at the national level and studying nineteen selective colleges and universities, the authors propose a set of potential actions to be taken at federal, state, local, and institutional levels. With recommendations ranging from reform of the admissions process, to restructuring of federal financial aid and state support of public universities, to addressing the various precollegiate obstacles that disadvantaged students face at home and in school, the authors urge all selective colleges and universities to continue race-sensitive admissions policies, while urging the most selective (and privileged) institutions to enroll more well-qualified students from families with low socioeconomic status.

Jerome Karabel, The Chosen: The Hidden History of Admission and Exclusion at Harvard, Yale, and Princeton (2005).

Many of Karabel’s findings are astonishing: the admission of blacks into the Ivy League wasn’t an idealistic response to the civil rights movement but a fearful reaction to inner-city riots; Yale and Princeton decided to accept women only after realizing that they were losing men to colleges (such as Harvard and Stanford) that had begun accepting “the second sex”; Harvard had a systematic quota on “intellectuals” until quite recently; and discrimination against Asian Americans in the 1980s mirrored the treatment of Jews earlier in the century. 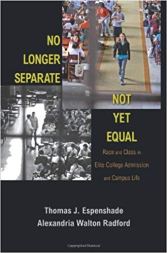 The authors explore the composition of applicant pools, factoring in background and “selective admission enhancement strategies”–including AP classes, test-prep courses, and extracurriculars–to assess how these strengthen applications. On campus, the authors examine roommate choices, friendship circles, and degrees of social interaction, and discover that while students from different racial and class circumstances are not separate in college, they do not mix as much as one might expect. The book encourages greater interaction among student groups and calls on educational institutions to improve access for students of lower socioeconomic status.

Gabrielle Bluestone, The college admissions scam is the perfect scandal in the golden age of grifters, Wash. Post, Mar. 13, 2019. “Part of what makes the Varsity Blues scandal so resonant is that it bluntly exposed workarounds that already exist to undermine higher education’s facade of meritocracy. It has long been legal — if distasteful — for wealthy parents to bribe colleges . . . .”

Rainesford Stauffer, I Learned in College That Admission Has Always Been for Sale, NY Times, Mar. 13, 2019. “The bribery scandal is no more abhorrent than the completely legal industry that helps many wealthy kids get into the schools of their dreams.”