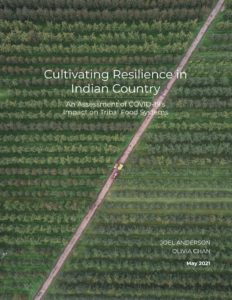 The COVID-19 pandemic has hit many Native American communities and food producers hard. Despite current and longstanding challenges in Indian Country, many Native advocates, organizations, and food businesses have worked to address hunger and promote food sovereignty and entrepreneurship in their communities, and nationwide. This report reviews the impact of the pandemic on food production, distribution, and security in Indian Country. It looks towards solutions to address short- and long-term needs to ensure Tribal sovereignty, food system resiliency, and the health and welfare of all Native people.

If you can make it in New York, the cliché goes, you can make it anywhere. But there’s making and then there’s making it. A recent feature in Eater identified a trend in the habits of a sliver of New Yorkers: the increasing use of “private dining” venues accessible only to the wealthiest and most networked people in the city. These sanctums for the hungry elite often sit steps away from the watering holes of the mere bourgeoisie; above the cavernous Tavern restaurant in Hudson Yards, for example, are secret dining rooms upholstered in leather and designed to conjure the atmosphere of a country club. Anyone can eat downstairs at Tavern, but access to the private rooms costs $7,500 a year in dues and a $15,000 initiation fee. Meanwhile, new restaurants with big-name chefs are opening as amenities in luxury condo buildings throughout the city, with reservations available only to residents and their guests. “People who have resources,” a restaurant consultant sagely explained to Eater, “would like to spend more time together with people who have resources.”

A food desert is an area or region of the United States that features a large proportion of households with lower income, inadequate access to transportation, and limited food retailers to provide fresh produce to consumers. Though food deserts are often unheard of by communities with access to food and other retail opportunities, these food deserts appear disproportionately in low-income minority communities—not just areas with low income. While many grocers open shop on every corner in most mid- to high-income neighborhoods, food deserts leave low-income minority communities lacking in resources. For many minorities, where they live is not so much about location preference as it is about affordability. Food deserts are often hidden because of the belief that Americans choose where they live. In most cases, there is a causal connection between affordability of homes and the now-illegal zoning and redlining actions of the past. Even before the use of redlining by local governments, minorities did not get a seat at the table in rich, up-and-coming neighborhoods, and continually lost out on all kinds of retail opportunities. Although the Fair Housing Act of 1968 sought to eliminate housing discrimination based on race, color, sex, religious beliefs, and other classes of identification, discrimination caused by zoning and redlining pushed these protected groups farther from access to fresh food. In turn, this lack of food access divided and continues to divide groups of people—creating even more of a disparity between races. Now, at federal and state levels, the government is seeking to repair the dry spells within food deserts that leave many minority communities without access to find and eat nutritious food.

This Note argues that food deserts are a remnant of housing segregation based on race and, as such, continue to create racial, economic, and health disparities. Although the United States has started to remedy these actions, the country can still do more by unifying its actions and spreading out its aid. Part I addresses what a food desert is, the power of food, and the impacts that come from living in food deserts around the country. Part II addresses the causes of food deserts—zoning and redlining—and how the Fair Housing Act initiated change, but how it could not undo what had already occurred. Part III addresses what the country has done at federal and state levels to eliminate and mitigate food deserts, and how the country can continue to remedy them.

New Book: “How the Other Half Eats: The Untold Story of Food and Inequality in America”

New Book:  Priya Fielding-Singh, How the Other Half Eats: The Untold Story of Food and Inequality in America (2021). Overview below:

Inequality in America manifests in many ways, but perhaps nowhere more than in how we eat. From her years of field research, sociologist and ethnographer Priya Fielding-Singh brings us into the kitchens of dozens of families from varied educational, economic, and ethnoracial backgrounds to explore how—and why—we eat the way we do. We get to know four families intimately: the Bakers, a Black family living below the federal poverty line; the Williamses, a working-class white family just above it; the Ortegas, a middle-class Latinx family; and the Cains, an affluent white family.

Whether it’s worrying about how far pantry provisions can stretch or whether there’s enough time to get dinner on the table before soccer practice, all families have unique experiences that reveal their particular dietary constraints and challenges. By diving into the nuances of these families’ lives, Fielding-Singh lays bare the limits of efforts narrowly focused on improving families’ food access. Instead, she reveals how being rich or poor in America impacts something even more fundamental than the food families can afford: these experiences impact the very meaning of food itself.

Packed with lyrical storytelling and groundbreaking research, as well as Fielding-Singh’s personal experiences with food as a biracial, South Asian American woman, How the Other Half Eats illuminates exactly how inequality starts on the dinner plate. Once you’ve taken a seat at tables across America, you’ll never think about class, food, and public health the same way again.

This essay reflects on Philando Castile and the work he did to support the children who passed through his school cafeteria. By regularly paying off their school lunch debt, Mr. Castile voluntarily assumed a vital caretaking role that the state refused to accept: namely, supporting food-insecure children and education through debt-free lunch. He kept children safe in this regard, even up to the moment that the state violently stole his life on July 6, 2016. Even as his death is a marker of the continuing, racialized excesses of American policing, Mr. Castile’s life in service to hungry schoolchildren reveals the sometime perversity of the public-private American social provision policy that continues to impose the burdens of financial insecurity on individuals least able to bear them.

News Report: “The Reality of Surviving on Food Stamps During a Pandemic – Online”

[Let me add for law students or others looking for topics, I think this is a good topic to explore even more from a law angle. Source of income discrimination with regards to housing vouchers has gotten some attention, but as this op-ed shows, the nature of funding is also an issue in other social welfare programs.]

New Blog Post: The Pitfalls of Food and Nutrition

The Supplemental Nutrition Assistance Program (SNAP), the largest federal anti-hunger program in the United States, is perhaps the most important income supplement for low-income individuals. Every few years, a debate reemerges in Congress around block granting SNAP. The debate highlights the tradeoff between the cost savings of block grants versus the stability of the program to participants. Block grants can provide states with flexibility over SNAP requirements. However, keeping SNAP as an entitlement program will better provide benefits to individuals in need. Instead of reviving politically contentious debates each time Congress discusses SNAP block grants’ budget, Congress should maintain SNAP’s current entitlement program to better to prioritize anti-hunger goals. This blog discusses two case studies, the Nutritional Assistance Program (NAP) in Puerto Rico and the Temporary Assistance for Needy Families Program (TANF), which illustrate the negative consequences of block granting programs and why Congress should resist this move.